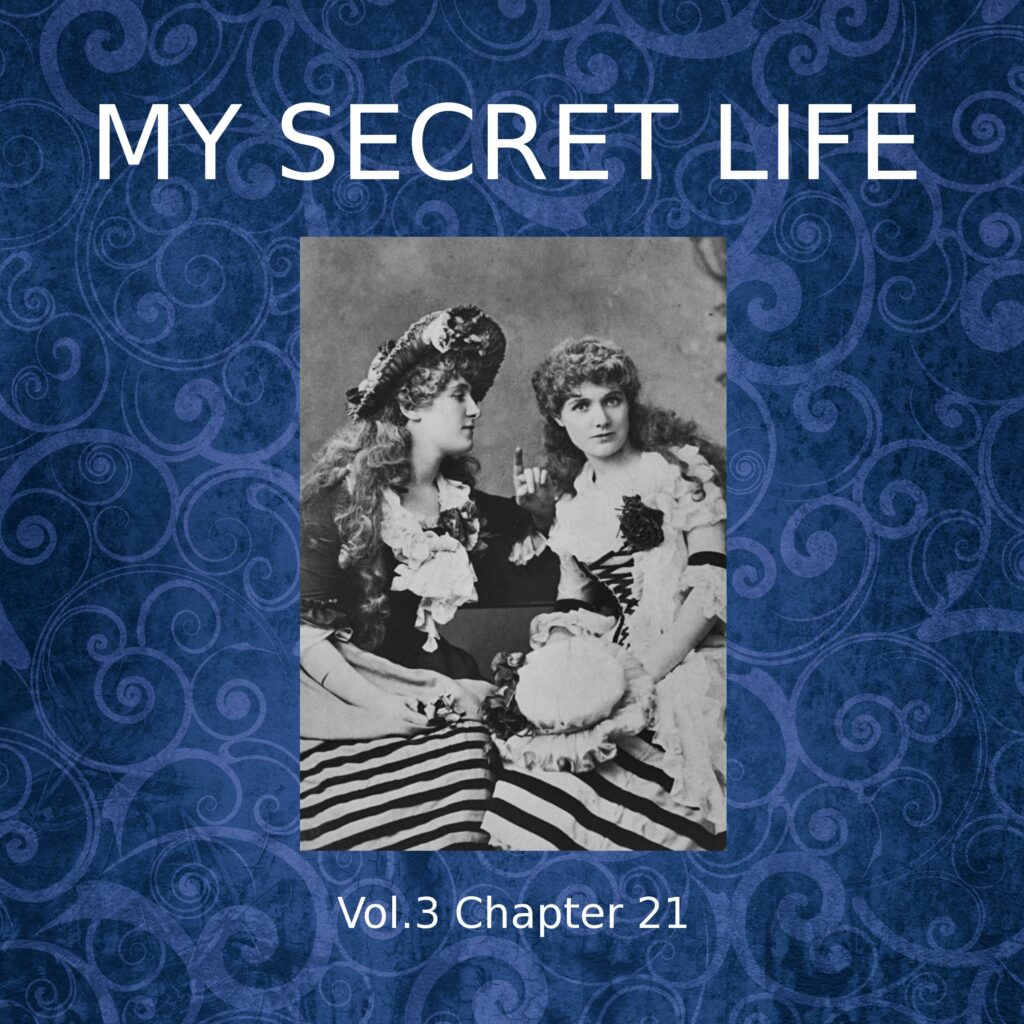 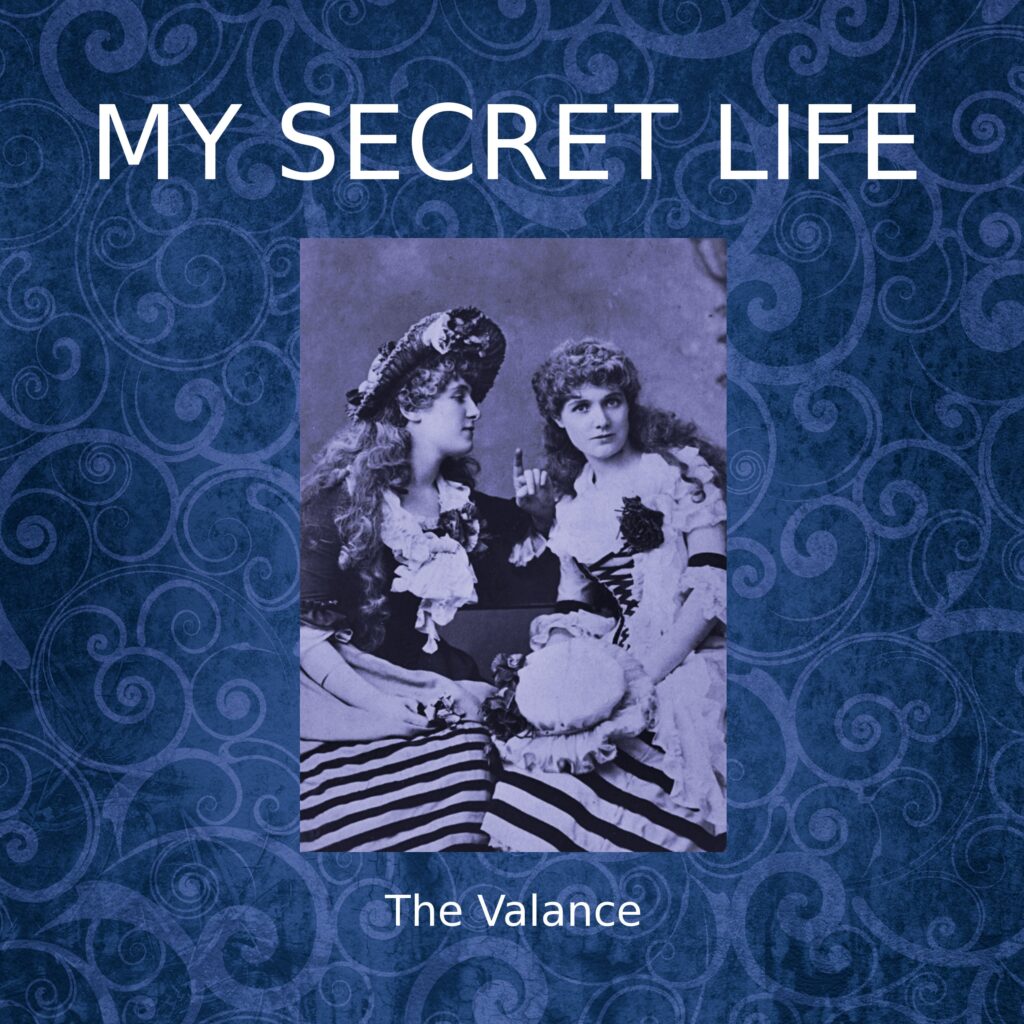 Further undressing. • Slippers wanted. • Toilet operations. • The effects of hash and beer. • A windy escape. • Feeling for the pot.–Sisters exeunt. • A crushed hat, and soiled trowsers. • A narrow escape. • My benevolent intentions towards Jenny’s sister.

I thought I had had my pleasure in silence, but I was wrong, I was heard, I had given a slight sigh. The anxious ears of poor Jenny heard it. She made increased noise whilst her sister went tranquilly on, and unlaced her boots without taking any notice or hearing me, whilst the last drop of sperm was running over, and I was still looking at her cunt, and sniffing.

Then she stood looking at her boots. “Ah ! this one wants soling, — where are my slippers? — where did I put them?” They were just under the bed, close by me. “Here they are”, said Jenny rushing to the side, and pulling them out she gave them to her sister who took them, but instead of putting them on pulled off both her stockings. “I’ll wash these to-night”, said she, “and darn them the first thing to-morrow, — I’ll cut my corns.” “Oh! do come down and have tea, you can cut your corns after you have washed your feet to-night, — oh ! put something on, and come.” “I won’t be long, — you go and make tea.” “No I shan’t, I know you’ll be an hour, — it will be spoiled.” “I can cut them so much better by daylight, — I cut my toe last Saturday night you know”, and without more ado she walked round the foot of the bed to the other side, where in front of the window was a small dressing-table, a looking-glass, and a chair by the side of it. She was now absolutely naked from head to foot. As she neared the window she said, “Oh! how delicious the air is blowing upon one’s skin, — I quite hate putting on my chemise again.” Jenny still kept moving about, and shuffling her feet; but the sister engrossed in herself, kept on talking about: her dress, her Tom, the place she was going to on the morrow, and seemed to notice nothing. At length she placed one foot on the chair by the window, and began cutting her corns. And now I had a view of her backside and naked form from that side of the bed.

When she had finished one foot, she put it down, and sat on the edge of the bed. “Poof! how hot it makes me stooping, — it makes me sweat, —but I’ll do the other, — drat the tight boots, they make corns”, — and up went the other foot. Out went my head, and up went the valance, but I was fearful of being seen, so took out my pen-knife, and cut a long slit in the valance. Then my eye was never still to her buttocks, but I could not see her seat of pleasure so well, so I took to the floor again, and saw her cunt better.

Then she stood for a minute looking over a little white blind into the gardens. “There is Mrs. B…. and her daughter walking.” “Oh! pray put something on, if they should see you.” “Impossible they can’t”, —and she stooped down, and began operating on the other corn. The cunt opened a little and so did some-thing else, for out popped a pretty loud, short, sharp fart.

“You beast”, said Jenny. “I beg your pardon”, said the sister, “I’m always windy when I have eaten hash, and drank beer, — I could not help it.” “It’s dirty”, growled Jenny. “You’re far enough off, and it’s better out than in”, — and ceasing to chuckle, and as if half ashamed of herself she went on corn-cutting without speaking, but that did not suit Jenny who soon began a conversation, and shuffling about. She made no further allusion to the fart.

When she had finished it only seemed as if I had been looking at her there for a few seconds, but on that side of the bed she must have given me ten minutes of that lascivious gratification. I was so engrossed, so delighted that even the fart did not amuse me; it annoyed me; for it made her alter her position, and withdraw from my lustful gaze, that charm which perhaps no one but her husband had ever gazed upon so long and so earnestly.

Then she went back again to the other side of the bed, put on stockings and slippers, and getting up, “Where is the pot” said she, “is it this side or the other?” and began feeling under the valance within a few inches of me, but it was not there. Evidently it was usually there, indeed I know it was, but Jenny and I both pissed before we began to think of fucking, and I had put the pot under the washing stand.

“Not there”, shrieked Jenny rushing to the pot. The sister turned round and saw it, I peeped just in time to see her thighs open as she squatted, then came a heavy thump or, the bed. The sister said, “What’s the matter? — don’t give way, — don’t be a fool now.” Then without pissing she got up, and came to the bed-side. Poor Jenny excited beyond bearing by anxiety, had fainted on seeing her sister on the point of discovering me in searching for the pot.

She shook Jenny, threw water on her face, and Jenny soon recovered. “What on earth’s the matter? —you give way, you do, — a woman need not faint like that, I’m sure”, said she angrily, “you scared me dreadful.” Jenny said nothing, but repeated that she wanted her tea, that thundery weather always made her feel sick and faint.

“Well we will go down at once, — I did not think you were ill.” “You might have seen I was.” “I did not, but I’ll be ready in a minute.” Again she squatted on the pot, thighs wide open, belly towards me, pissed like a water-spout, and let one or two little farts of which no notice was taken, whilst I with cock stiff was looking on, and again frigging myself. I could not help it, for every turn, every movement she made was such as if done expressly to show off her naked charms, and drive me randy-mad.

“Give me my night-gown Jenny, it’s at the foot of the bed, and I’ll only put my dress over it, — it’s so hot.” Jenny turned to take the night-gown from the bed. “I’ll just wash a bit”, said her sister, “I’m almost in a lather with heat and sweat.” Pouring out water in the basin she placed it on the floor, and turning towards the bed squatted, and sluiced her cunt, then rubbed it dry with the towel. “That has made me comfortable”, she remarked, and began putting on her frock.

As she did so she remarked, “You have not emptied the pot to-day, — you should, it smells this hot weather.” “Yes I did”, said Jenny innocently. “Well then you’ve peed a lot.” “I’ve done it once or twice since morning”, said Jenny hastily.

Then the sister went out first. When half-way down-stairs I emerged from my hiding place and listened, heard Jenny say, “I may as well empty the slops, you go and see if the water boils.” Up came Jenny. “Oh ! I’m ready to die, — hish !—be quiet.” She emptied the pot and waters into a slop-pail, and went downstairs quickly whilst I followed her silently. I was covered with flue, and had managed to crush my hat; my trousers were partly unbuttoned, and one leg covered with spunk. We got to the ground-floor almost together, and there I stopped. So soon as I heard she was in the kitchen I moved along the passage, and slipped out, leaving the street-door ajar. Luckily a cab was close by, and I jumped into it. The first thing I did was to button up properly. I bolted past my servant as she opened the door to me, took another hat, wrapped the old one up in paper, and the same night tore out the lining, and threw both away in a byroad.

I was in an indescribable state of excitement after this delicious afternoon, and was seized with an almost delirious letch for the woman. I was sleepless for a night or two, scheming how to possess her.

Early on the Monday I got to Jenny’s, and spent the rest of the day fucking, and talking of the sight I had seen. My imagination helped to allay my excitement, for the form of her sister though more beautiful than Jenny’s had still a family likeness to her, and as I clasped Jenny in my arms I pictured her as her sister, and enjoyed her as such.

I was cautious in my disclosures, for I found that Jenny who had been most inquisitive about other women, and delighted to hear about how they talked, and walked, and pissed, and fucked; was annoyed when I talked of her sister’s nakedness. I ought not to have looked, — why I had seen more than she, her own sister, — a poor woman, and married, and she to have her thing looked at by a strange man, — her husband could not have seen more, — and so on. So though I described her sister’s charms I took care not to ex-press any admiration of them, nor to say I had frigged myself, and felt desire for her. Jenny had not noticed that my trousers were undone, and sperm-soiled. I had not noticed that myself till I got out of the house on that eventful afternoon.

On the Monday when I saw Jenny, she declared that another hour’s anxiety would have killed her. We found that the time from the minute the sister came into the bed-room, to the time she went downstairs was two hours. Jenny thought that she must have been half-an-hour working at her dress. Jenny had walked round the room trying if she could see me, or if I was looking, but could only do so once or twice at the holes, or fancy she did; but the long tear in the valance through which I could see with both eyes at once, and just above which her sister had put up her legs, she had never noticed; nor did she believe me when I said that I could see the cunt when her sister’s backside was towards me, when near the window. So I made her lie down, and look from the floor whilst I stood naked, pretending to cut my corns. Then she said it was a shame of me to be peeping. She had a clear inspection from my bum-hole to my ballocks, and knew I had seen the cunt.

She did not contend any longer. “Do you mean to say, that if you had been under the bed, and had known a naked man was cutting his corns, you would not have peeped out?” No she would not; but had it been a naked woman perhaps she would, Jenny re-plied. So after she had heard from me how much I had seen of her sister’s body, between her back- bone and her navel, and I had told her something which made her say, “Law has she!” though I can’t recollect what it was, the subject dropped. Then I learnt from her more about her sister’s wages, mode of life, and where she worked; for although the thing seemed ridiculous, I had a letch, and meant to try to put into that young woman if possible, though I had not then stroked Jenny many weeks. I liked variety.